The Art of Bollocks

With Oscar season now a distant memory and the usual list of worthy, issue-based films dominating the ceremony, I was wondering why this is nearly always the case.  This year’s Best Picture winner, Parasite, a tale of two families from opposite ends of the socioeconomic spectrum, is hardly a light watch.

Oscar recognition for films with massive box office receipts is rare.  Clearly there are exceptions to the rule – Titanic, being the most notable; and you can toss The Silence of The Lambs

into the exception pot too.  More often than not, though, the winning film’s box office receipts spiral dramatically upwards after the exposure of the win. Think Moonlight, The Shape of Water, and Spotlight from recent Best Film winners.  Undeniably good films,  but hardly runaway box office juggernauts like other un-nominated films from their respective years. You really need to track back to the 2004 winner of best picture, The Lord of The Rings: Return of The King, which grossed over a billion dollars, to find any kind of correlation between critical and public acclaim.

There are many reasons for this.  One could argue that just because something sells by the bucket load doesn’t guarantee quality.  Indeed you could argue that the inverse is often true.   This could certainly be the case in other art forms. Dan Brown’s Da Vinci Code books sell in

their millions but I think you’d struggle to find anyone who could convincingly argue Brown will go down in the annals of literary history as one of the greatest writers of all time.  His novels are certainly page turners, although surely that is a pretty minimum requirement for a book.  The same could be said for Jeffery Archer – great at plot, not so great at beautifully lucid prose.  In the music world, Vienna by Ultravox was famously kept off the number one stop by Shaddap You Face. And the less said about that the better.

Movies, though, are a different beast. There appears to be an implicit snobbery about films.  Whilst I can appreciate the beautiful camerawork, lighting, editing, sound design in, say, Moonlight – I’d rather watch Arrival from that year’s Best Picture list.  Does that make me a philistine?  Probably, but the point being that films that are more whizz-whizz-bang-bang

than cerebral slow-burners (though Arrival, despite being notionally an alien invasion film, is actually a highly layered, intellectual film trading in heavy themes) are more often than not overlooked in favour of issue-based titles.  Steven Spielberg, after all, didn’t win his first Oscar until 1994 for Schindler’s List. Again, great film, but better than Jaws?

Little doubt the Oscars will continue to be dished out to the usual plethora of worthy winners over the next few years. So, just for the hell of it, I thought I’d take a look at a few films that were never going to win Best Picture due to their unashamedly mainstream appeal, but maybe could have merited a nomination. Maybe The Academy need a new award: Best Shitkicker?

There’s Something About Mary

Most people seem to associate this film with a single scene, maybe even a single shot – Cameron Diaz with her jizz-enhanced fringe.  There’s so much more to this Farrelly Brothers 1998 film though. The inspired casting of Ben Stiller and Diaz, and the likability of their characters contrasting so effectively against Matt Dillon’s fantastically sleazy Pat Healy.  The plot is pleasantly straightforward, the humour relentlessly puerile (you have to wonder whether it would be greenlit in the current climate), the soundtrack is inspired, and the set pieces always drive the narrative.  The main reason it works though is because it retains its heart throughout the 119 minutes run time.  Ted’s pursuit of Mary is a heartfelt and genuine thing,  you want it to work for them, and as such are invested in the outcome.

Talking of puerile comedy, it doesn’t get more base than some of the scenes in Sacha Baron Cohen’s 2012 political satire. Relentlessly

funny, frequently obscene yet with artful cinematography, it’s a film that’s almost worth watching for the helicopter scene alone, which somehow manages to mine humour from 9/11.  Channeling a pretty familiar duck out of water set-up so successfully used in the eighties by Paul Hogan’s Crocodile Dundee, the film features a ramshackle plot which sees Cohen playing Admiral General Aladeen, a Middle Eastern dictator visiting New York on the auspices of addressing the United Nations to win favour for his homeland.  In common with There’s Something About Mary, it also features a basic boy-meets-girl narrative that, despite the frequent gross-out comedy sequences, manage to sustain the narrative drive as the set-piece gags fly around like weapons of mass destruction with pointy tips.

While we’re talking weapons, let’s discuss the sublime Terminator 2. It’s been a long established fact that sequels rarely live up to the promise established by the first iteration. Basically there’s The Godfather Part II…and then nothing.  Until the second Terminator film popped up 1991.  Visually stunning with a pleasingly ludicrous yet easy-to-follow narrative it rips along at breakneck pace, rarely stopping for breath, with each scene setting up the next with increasing verve.  The sequence in the Pescadero State hospital where Sarah Connor is re-introduced to Arnold Schwarzenegger’s terminator is as close to filmmaking perfection as you’re ever likely to see in a movie.  Time travelling machines have never been so beautifully rendered.

Back to the Future

Time travelling we go again with one of the greatest movies ever made. It’s almost flawless. Pretty much every frame has a purpose, 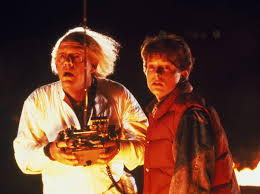 and as befitting a movie about time travel, scenes that at first appear meaningless – the woman interrupting Marty and Jennifer’s snog by rattling a collecting jar for the lightening-damaged clock tower, to cite just one example – are all critical to the plot and loop back on themselves as the narrative unfolds.  Back To The Future won an Oscar for sound effects editing, was nominated for Best Original Screenplay, but lost out to Witness. Baffling.

Matt Damon is stuck on Mars and the whole world is fascinated.  What’s not to love? Based on the brilliant Andy Wyman novel and directed by Ridley Scott The Martian is one of those insanely enjoyable romps that skip along so effortlessly you wonder why no one thought of leaving him behind in the first place.  Weirdly this was nominated in the comedy section of several awards rosters.  Though
not without wit, you wouldn’t necessarily flag comedy as its defining plank. With typically gorgeous Scott visuals and a soundtrack that also drives the narrative, The Martian is just good old fashioned, beautiful escapism that serves up a treat for the eyes and a holiday for your brain. Needless to say it didn’t win any Oscars.

So there you go, five films that didn’t, but frankly should have, won an Oscar.